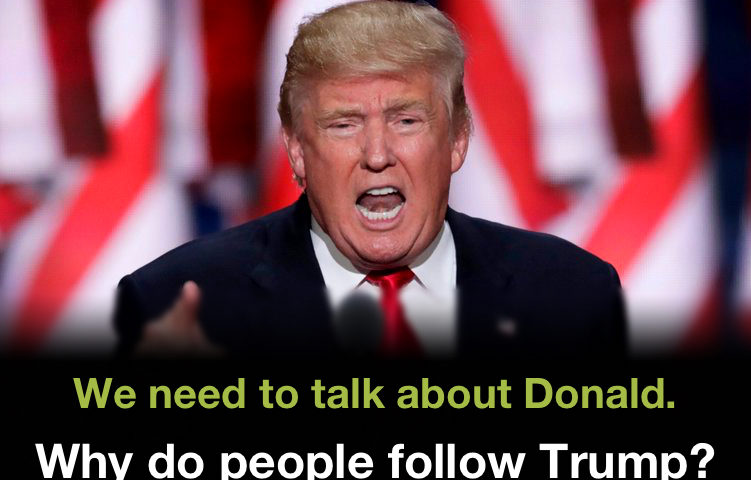 Whatever your political views about Donald Trump it is hard to deny his leadership continues to be a phenomenon that business school and corporate models of leadership simply cannot explain. Emotionally intelligent, visionary, charismatic, strategic, strengths focused, empathic, humble with a steely determination – forget it! So why is Trump a successful leader?

In 2013 Dr Nik Steffens[i] forensically analysed the election speeches of leaders of the main Australian political parties since 1901. He was in search of the word “we”. Leaders who went on to win the election used the words ‘we’ and ‘us’ once every 79 words, whereas losers only used them once every 136 words. In 34 of 43 elections the winner was the candidate who invoked the idea of ‘we’ and ‘us’ most frequently.

Trump used the words “we” and “us” an astonishing once every 23 words.

In his inauguration speech Donald Trump used the words “we” and “us” an astonishing once every 23 words and in this week’s State of the Union address is was once every 36 words. By way of contrast in her regular stump speech Hillary Clinton said “we” and “us” once every 76 words. Enough to win in Australia but only one third of Trump.

Leading is always about “we” not “me”

Why does it matter? Because leading is never about who “I am”, it is always about who “we are” together and what we can achieve.  Trump has created, or at least expressed, an identity for the working and middle class of middle America. The forgotten America. The Main Streets that lost out to Wall Street and globalisation. He represents them, champions them, talks like them, shares their anger, embodies their aspirations and he tells them at every opportunity that “we” are on this quest together, to make America great again. To them, he is one of them and is slowly but surely embedding their view of America into the system; the supreme court, foreign policy and tax. The more difficult his task, the more enemies he creates, the more they realise they can never abandon him. Draining the swamp will be tough and so they have to support their comrade – no to do so would be to betray who they are, who “we are”.

We’ve written a White Paper using the research from Dr Steffens and many others, as well as our own ground-breaking research with University of Sussex into the critical role of social identity in teams and leadership. Whether you are leading an organisation, developing leaders, or trying to defeat a Donald Trump you cannot ignore the New Science of high performing teams.

According to traditional models of leadership Trump lacks any of the traits or capabilities for success. He lacks emotional intelligence. He is not humble with a steely resolve. He is not visionary, often rambling, contradicting himself and changing his mind. He is not strategic, instead reacting to news events and the next “deal”. He doesn’t recognise or appreciate people’s strengths, but has fired more staff than any president in history.

And yet he has transformed US politics and maintains an unshakable base of support from approximately one third of the electorate that seems to support him regardless of his deeds or words. Why?

It appears Trump’s genius has been to position himself as an authentic representative of an American identity that mainstream politicians no longer spoke for.

Download our White Paper the New SCIEINCE OF GREAT TEAMS to find out more.