Brexit and the psychology of identity 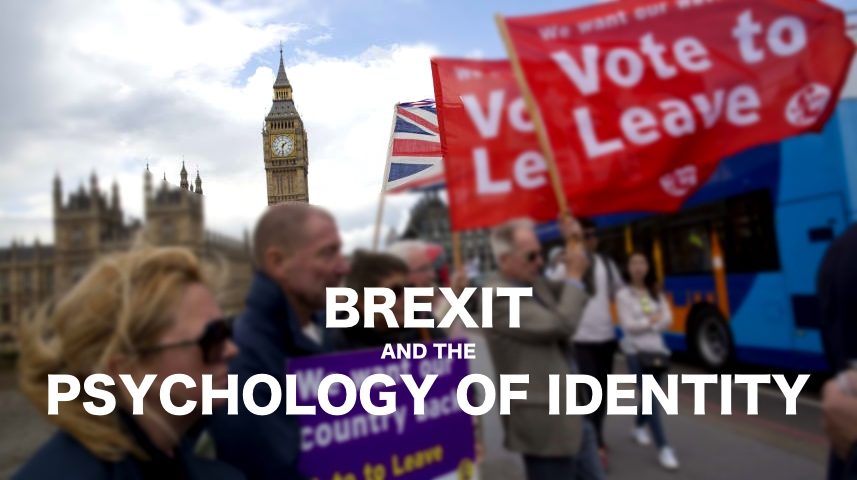 Brexit has been dragging on for two years but the problems seem more intractable than ever, the differences more irreconcilable and the chance of a coherent proposal from the government even less likely. Politicians accuse each other of indulging in identity politics, but what do they mean?

It is impossible to understand Brexit without understanding the psychology of identity, because the problem the UK faces is a division of identity. We no longer agree who we are; where we have come from, what we stand for, what it means to be one of us, what we’re capable of, and most profoundly, what makes us “us” – what makes the British different. Instead of agreement, there are at least two polarised versions of what it is to be British and without an understanding of the psychology of identity, reconciliation will be impossible.

Your identity is your definition of who you are and it is partly influenced by your genes, early life experiences and enduring predispositions – your personal identity, or personality if you like. But in social situations your social identity is much more important[1]. This is the sense of self you get from categorising yourself as belonging to a social group. Self-categorisation is an unconscious cognitive process that happens constantly. In social situations, once you categorise yourself as belonging to a group you exhibit unconscious biases to favour others in your group and to be prejudiced against those outside it. We see this in obvious behaviours such as between rival groups of football fans, but it also happens in subtle ways permeating the way you think without you being aware of it.

In one classic psychology experiment participants were shown photos of paintings and asked to say which they preferred. After the experiment, they were told which artist they preferred and were asked to help the experimenters allocate money to a list of participants to thank them. They could have given everyone equal money but they didn’t. The only thing they knew about the other participants was whether they shared their preference for an artist and armed with this information alone they gave more money to “in-group” people, who liked the same artist as them, and less to the “out-group.” In fact, tellingly when we think of Brexit, on the basis of something as trivial as this they would actually allocate less money to their own group, if it enabled them to maximise the difference in reward with the other group. The experiment was the first of many known as the minimal group experiments that showed how even in the most inconsequential of circumstances humans are hardwired to be biased in favour of an in-group and prejudiced against an outgroup.

In the past political groups in the UK were divided between left and right, but broadly agreed on what it meant to be British and this “meta-category” sat above their differences as a unifying force. Brexit has changed that; now the debate is about who we, the British, are and at the moment no obvious category sits above it to unify the nation. This means that in sometimes subtle, but often very obvious ways, people think and act with bias in favour of their version of the British identity. They see themselves and others through their identity lens, which overwhelms and distorts other factors.

If bias exists in minimal groups, what happens when groups have real meaning and, just as importantly, what motivates people to strongly identify with a particular group? Our research with University of Sussex looked at these questions[2]. First, we explored what are the factors that people consider when deciding to categorise themselves as in a social group. We found five “needs” that motivate people to identify with a group, which accounted for 89% of the variance.  When individuals think about a group they are more likely to identify with it if they believe being in it provides:

Second, we found that when people identify strongly they strive much harder to elevate the status of the group by helping it to succeed. In our research success was measured in team performance and we found that the 20% of teams with the strongest identification outperformed the 20% with the weakest by a massive 53%. Team members worked hard and were prepared to put the needs of the team above their own needs, in acts of self-sacrifice.

In our work with organisations and teams, we have used these finding to create a methodology that helps leaders develop strong identities in teams, which is called TRIBE.

The research shows people are much more motivated to categorise themselves as belonging to a group, absorbing it into their own identity, their sense of self, if they can clearly see how this group fulfils the five fundamental identity needs. And having done so, they are highly likely to strive for the group to achieve success. So how do the Brexit Leave and Remain camps compare in the clarity of their identity proposition?

The Brexiteers have painted a picture of Britain that is largely nostalgic. According to them, our distinctive edge is our buccaneering spirit and our historical success as a trading nation capable of building an empire. Resolute and ingenious we are the nation that fought off the might of Nazi Germany in the second world war. We are traders capable of once more dominating the international stage.  To be one of us is to be traditional in values, attitudes and behaviour.

Let’s compare the elements in this identity to the TRIBE model, which is an acronym for:

This frequently told identity story was sufficiently vague so that it could be adapted for those who were against globalisation, immigration and the neo-liberal agenda of deregulation and austerity, whilst also appealing to the neo-liberal internationalist who sees Britain as open for business.

Our analysis shows the remainers articulated a much less complete, clear and therefore compelling identity for Britain within the EU. Using the same TRIBE checklist this is what we came up with.

Is this identity story as powerful? We believe the remain narrative had substantial gaps and has been less clearly articulated. Instead of developing a strong identity story for Britain in the EU, the remain camp relied on the rational economic arguments and overwhelming expert evidence that leaving would not only fail to bring down immigration, but it would also do immense harm to the UK economy. The psychology of identity helps us to understand why these arguments were ignored by those voters who identified with Leave. Indeed, as they were put forward more strongly and became more threatening, the cognitive bias of those who identified with leave only grew.

Given the divisions that have opened up Britain will only resolve its identity crisis, when a new meta-category that sits-above and unites the Leave and Remain versions of Britishness emerges. Identity theory suggests that this can happen in two ways.

First, political leaders have the power to begin a new narrative that creates a new unifying British identity. They are abjectly failing to do so. Indeed, divisions within parliament, and specifically in the Conservative party, are only enflaming the situation. Unfortunately, their lack of psychological literacy means our politicians are slaves to their own identity biases, rather than leaders who can create and advance something new to heal wounds and take the country forward.

The other alternative, is for people to be triggered to redefine the identity themselves, which typically only happens when their group is faced by a substantial, insurmountable, external threat. A crippling trade war, a rapid and deep recession, or a military war should be enough. None are very appetising prospects.

In the next article in this series, we’ll explore the role of political leaders in the Brexit debate.