LOUISVILLE, KY - SEPTEMBER 16: The Ryder Cup is shown on the ninth hole during the European team photo shoot prior to the start of the 2008 Ryder Cup at Valhalla Golf Club on September 16, 2008 in Louisville, Kentucky. (Photo by Harry How/Getty Images)

If you wanted a case study in how to get it wrong the USA Ryder Cup team would have been a good starting point. Over the past two decade, the USA has had some of greatest players of all time and more top 50 players in 18 out of 20 years, yet trail Europe 8-2 in the Ryder Cup. But we believe the tables have turned and many of the psychological barriers to USA performance have been removed this time, which means we predict the USA will win the Ryder Cup in 2016! Here we explain why the USA will have a psychological edge that has been missing for two decades. 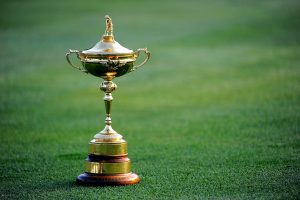 The Ryder Cup, more than any other trophy, is won by the best team, not the best players. Perhaps, it is inevitable that golfers who compete as individuals excepting for 4 days every two years at the Ryder Cup, will be particularly influenced by team dynamics when asked to collaborate for more than personal glory.  In this article we investigate how the USA has got it so wrong and why we think they have turned the corner.

In previous years the USA team appear to have lacked almost all the psychological foundations that create great teams. In collaboration with the University of Sussex, we have researched more than 50 amateur and elite sports teams and proven that team identity has a strong and measurable impact on team performance. Teams with a strong identity consistently outperform those with weak identities. Moreover, we identified the psychological conditions needed to create a strong team identity and from these created TRIBE a pioneering team development model that has helped, amongst others, the Women’s GB Hockey team achieve success at the Rio Olympics.

Using TRIBE, our acronym for Traditions, Relevance, Identity, Belonging and Execution, to analyse the USA team we conclude they have been doing almost everything wrong, until now. So what has changed? In the wake of their defeat at Gleneagles (their third in a row) the PGA of America set up a new ‘Task Force’ that has led a culture change. As this year’s captain Davis Love III said of the Task Force: “It’s a new business model, a new team-building model, to use all our veteran experience to build a new team culture and a consistent plan for the future.” Knowingly or not, we believe they have addressed many of the TRIBE foundations necessary for successful teams. Let’s take a look at what they have done.

“We’ve learned, and I think the PGA of America learned, that the players, the past captains, the future captains, need to have some input. You pick a captain, you let him go for a year and-a-half, play the Ryder Cup, pick another captain, you have no continuity… We’re talking about a system we’re going to run for Ryder Cup for years to come and have a continuity from year to year and let these guys see the same captains around them a lot and build for the future.” said Davis Love earlier this year. Through Love and his four vice-captains that consist of former captains and experienced Ryder Cup players, Tiger Woods, Phil Mickelson, Jim Furyk and Rickie Fowler, we believe the US has begun to embed the continuity and Traditions needed to help create a strong team identity.

Moreover, the likely contenders for places on this year’s team were identified a year ago and a series of events have been staged that we believe will help them to better understand the Relevance of the cup. It began with a dinner at the home of Jack Nicklaus last December attended by all of the Ryder Cup hopefuls. Love said “They heard Jack talk about the Ryder Cup, his great memories of it, and we talked a little bit about preparing for major championships or for Ryder Cups, and so we all learned something for sure… And it was just great to get everybody together. … It was a big group of guys that are now excited about the Ryder Cup, thinking about it and are part of the process.” And the process has continued with further events culminating in a celebration of the team at the New England Patriots Stadium in Foxborough before kick-off for the opening game of the new American Football season. If they didn’t realise it before the players can be in little doubt now that the Ryder Cup matters to America.  When players believe their team has Relevance beyond winning they are more likely to identify with it and put the team before themselves.

Great teams have a clear shared Identity that differentiates them from other teams. Barcelona FC play “tiki-taka” football, the All Blacks “Pass the ball” and the GB hockey women developed a unique identity focused on going “To the ball” which typified courage, risk taking and moving towards challenges not away, on and off the pitch. Through the task force, Love also appears to have begun to create a distinctive Identity for the USA team based on a collaborative detailed focused approach that leaves no stone unturned. Or as Love put it: “2016 will be a collaborative effort of many individuals from the task force, past Ryder Cup Captains, veteran players of The Ryder Cup to create the best environment for our team to be totally prepared to compete at Hazeltine National.” A team’s identity defines who they are, alters how they train and informs how they behave in competition. Without it they are a collection of individuals pursuing loosely connected objectives as best they can. An Identity is more than a strategy or tactic; it is a way of life. It consists of a cluster of beliefs about how we achieve success that is the bedrock for commitment, trust, respect, passion and pride. Without inside knowledge it is hard to gauge how successful this USA identity will be until we see how it is put into action, but we believe any distinctive identity is better than none.

Importantly the selection as the final captain’s pick of rookie Ryan Moore, the world number 42, means there is no place in the USA team for two-time Masters champion and world number seven Bubba Watson, who was recently voted the tour’s most hated golfer. We believe Love is right to put the need to quickly create an inclusive atmosphere and strong sense of Belonging ahead of pure playing ability. He said “Ryan fits so well with what we have in place. He’s an easy-going, thoughtful guy, but don’t be fooled. Ryan’s a great match-play player with an incredible match-play record. He has guts and determination and everyone saw that on Sunday. We are thrilled to have him with us.”

Finally, Love appears to have a clear focus on execution that has escaped many of his unsuccessful predecessors. “We know who is going to be playing with who, when they’re going to be playing, what matches,” a happy Phil Mickelson said recently. Tiger Woods has been working tirelessly on Execution. “I am so happy to see how well he has thought this through,” Mickelson said of Woods. “I can’t believe our conversations just this week, how detailed he is and the pairings, the possibilities, the players. Not just what matches they’re going to play, but where on the list. He has got us really a good, solid game plan that is easy to buy into and get behind. I’m very impressed.”

Of course team dynamics are not everything and we have not discussed the state of the European Team Identity, which has been a driving force in previous competitions, particularly in 2012 when captain José María Olazábal drew on the “spirit of Seve”, in honour of Seve Ballesteros, the cup-winning captain who died in 2011, to epitomise the fighting spirit of European golf. But we believe the USA, actively hampered by a lack of identity and the resultant poor team dynamics in previous years, has now been set-free. The USA have more experienced Ryder Cup players, 2 rookies compared to Europe’s 6, higher ranked players, 11 in the top 30 compared to 6 Europeans and of course home advantage!

Mind you, the last time an inexperienced European team competed with 6 rookies was in 2012. The Miracle in Medinah was Europe’s greatest triumph and probably the best Ryder Cup ever. As they say Golf is an unpredictable game!

MD at the Centre for Team Excellence and a Chartered Occupational Psychologist.